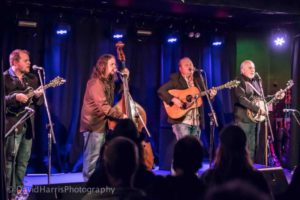 Special Consensus is a superb bluegrass outfit in a classic vein but with more than enough modern sensibilities to attract every ear in this now pleasantly fractionating genre. The vocals are spotless, the playing as shiny as a newly minted penny, and music like this is the reason people come to love bluegrass… Special Consensus approaches this hallowed American musical form with boundless energy and an aesthetic reverence that tickles the ribs, tugs at the heart, and puts a restless two-step in boots and bare feet…

Formed in the Chicago area in 1975, The Special Consensus is a four-person acoustic bluegrass band with a repertoire that features traditional bluegrass standards, original compositions by band members and professional songwriters, and songs from other musical genres performed in the bluegrass format. The band has released 18 recordings and has appeared on numerous National Public Radio programs and cable television shows, including The Nashville Network and the Grand Ole Opry at the historic Ryman Auditorium in Nashville, Tennessee. International tours have brought the band to Australia, Canada, Europe, South America, Ireland and the United Kingdom. The Special C has appeared in concert with many symphony orchestras nationwide and has brought an informative in-school presentation to schools nationally and internationally since 1984.

“Yes, Special Consensus may be Chicago’s very own veteran bluegrass band, but talent like this is the property of the world” – DAVID ROYKO; CHICAGO TRIBUNE

“Special Consensus exceeded our expectations as artists-in-residence. Your Traditional American Music program for the schools was well conceived and masterfully performed. Your community outreach mini-concerts were great fun and resulted in promoting ticket sales to the capstone concert. You earned the well-deserved standing ovation you received during the capstone concert“ – ROCHESTER CIVIC MUSIC; ROCHESTER, MN