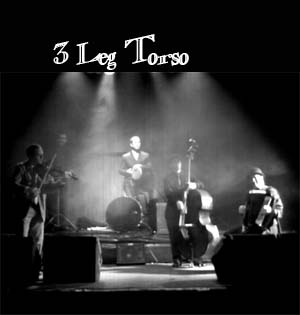 Three Leg Torso formed in 1996 as a violin, cello and accordion trio that came together with the humble goals of creating a passionate and new sound for their instrumental trio and having fun. Fun was had early on with a number of street performances that the trio termed “Meestering”. Over the following years the band expanded, the principal composers, founding members Béla Balogh (on violin and trumpet) and Courtney Von Drehle (on accordion) were joined by veteran percussionist-mallet player Gary Irvine, the fastidious mallets-percussion of Kyle MacLowry and the fiery upright bass player Michael Papillo. Their original repertoire evolved into a combination of Modern Chamber music, Tango, high energy Middle Eastern and Eastern European folk music, that, coupled with a cinematic sense of musical storytelling, bridged the worlds of serious art and popular culture. The group has been profiled on National Public Radio’s “All Things Considered” and on Oregon Public Broadcasting’s “Artbeat.”

“3 Leg Torso is just about as creative as a group can get… music that is evocative, varied, non cliché” Joe Natoli, Jan Press