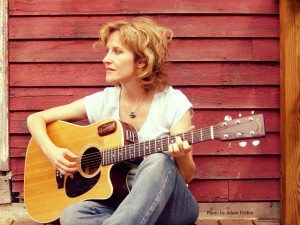 Sally Barris is an A-list Nashville songwriter who has had songs covered by such top-level artists as Kathy Mattea, Martina McBride, and Lee Ann Womack. Her song “Let The Wind Chase You”, recorded by Trisha Yearwood and Keith Urban, received a Grammy nomination for vocal collaboration in 2009.

While her writing credits mightily impress, fans and peers are most captivated by her bright spirit and expressive mountain soprano. Dirty Linen says “Barris knows how to write lyrics that are as forthright as a stream of clear water and how to support them with melodies that share that quality”.

When Sally is not touring solo, she is known as “Sister Waymore” in the power trio; The Waymores with Tom Kimmel and Don Henry.

In the last 3 years, the Minnesota native has performed Mountain Stage, New Bedford Summer Fest, The Wildflower Festival and The Kerrville Folk Festival. Sally is currently touring with her new cd “Wilder Girl”.

“Sally Barris has a voice like sparkling crystal. You could have knocked me over with a feather the first time I heard her. Her writing is from a deep, yet innocent, place and her point of view is just a bit off center. I am excited for her, she is standing at the beginning of her journey in this town, with all of it ahead of her. It reminds me of the first time I heard Beth Nielson-Chapman or Nanci Griffith. It’s going to be fun to watch.” – Kathy Mattea