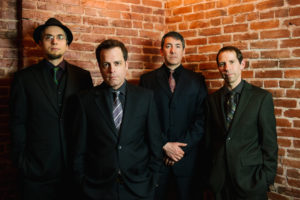 Portland’s #1 Swing Dance Party Band!
Stumptown Swing takes audiences back to 1920’s Paris, when gypsies with guitars, violins and upright basses made the leap from French musette to American “hot jazz” and kept Parisians dancing to this evocative new sound.

Named after their hometown, Portland “Stumptown” Oregon, the quartet is closely associated with the network of Lindy Hop, Balboa and Swing Dance clubs that have made Portland a major center of the Swing Dance revival. They are in demand as a live band for the almost nightly swing dance events throughout Portland. In addition to Stumptown’s thumping dance-oriented set, the group frequently performs a concert set featuring a wider variety of tempos and styles, appearing at both jazz and world music festivals.

Stumptown Swing released its debut album in 2014 and has been performing on concert stages and dancehalls throughout the Pacific Northwest. They are available for both private events and concert series – please sign the mailing list to hear about future shows, or contact us to book your own Stumptown Swing event.

“A joyous, vibrant and emotive collection of fine and heartfelt performances. Stumptown Swing qualifies as one of the year’s best jazz recordings.

With this recording, Tim Connell has announced his arrival as a world-class mandolinist. His technique on the mandolin has never been better and he coaxes tone by the buckets out of his instrument.

Ben Blechman’s solos swing and soar through the tunes that alternate between sweetness and melancholy and are always perfectly rendered.” – Mandolin Magazine, April 2014

“…a great collection of continental swing, samba and standards…rich chord progressions, nice melodies and comfy grooves.  Mike and Tim are the right cats for the job!!” – Don Stiernberg, Chicago, IL